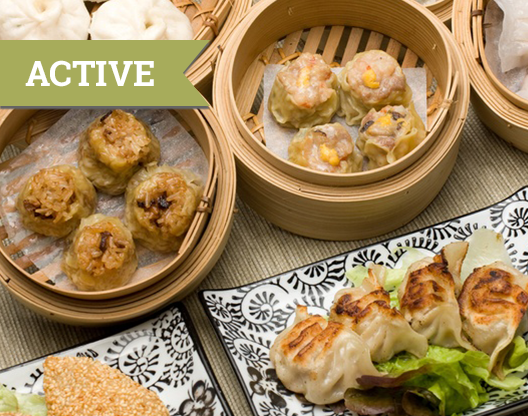 Curious about Chicago’s Chinatown but unsure where to start? Let our Bobby’s Bike Hike Chinatown Food and Culture Walking Tour be your local guide on this tour!

Chicago’s Chinatown, located next door to the Loop on Cermak Street and Wentworth Avenue, bursts with colorful shops, impressive monuments, and of course, delicious restaurants. Like a Chinese menu, the sheer number of possibilities can be overwhelming. Fortunately, with our local knowledge and partnerships we have created the perfect sampling tour for you.

You’ll sample culinary delights from five distinct Chinese regions while learning interesting facts about China and the history of Chinese immigration to Chicago. Whether you’re a first-time visitor or a Chicago native, our walking culinary tour of this thriving neighborhood will whet your appetite for another visit!

All food samples are included in ticket price, but consider upgrading to our VIP Package to include samples of plum wine, bubble tea, and a specialty jasmine Chicago craft beer only served at Phoenix Restaurant.

The Tour Starts with Cantonese Cuisine

Our first stop is a restaurant featuring cuisine from the southeastern region of Guangdong, formerly known as Canton. The Cantonese were the first Chinese people to emigrate to the United States during the California Gold Rush; to this day, most Chinese restaurants in America serve predominantly Cantonese or Cantonese-derived dishes. The restaurant we’ve chosen specializes in the traditional Cantonese appetizers known as dim sum, served with two varieties of Chinese tea.

Sweet Stop at a Chinese Bakery for Dessert Sample

The many offerings on display at the Chinese bakery we’ll visit next are a feast for the eyes, as well as the tongue. We’ll enjoy a popular dessert from the former Portuguese territory of Macau which melds Chinese and colonial traditions. Be warned, though, that you may have difficulty leaving the premises without purchasing an extra treat or two for the ride home!

Perhaps the greatest advantage of having such a well-developed Chinatown in our city is the opportunity to experience regional Chinese cuisines that aren’t widely available in the US. The third restaurant on our tour features delicacies from the northwestern city of Xi’an, one of China’s ancient dynastic capitals. This food has a Middle Eastern influence due to Xi’an’s position at the eastern terminus of the ancient network of trade routes known as the Silk Road.

Next, we’ll visit Chinatown Square for a taste of the bold, exciting flavors of Sichuan cuisine. Sichuan’s famous chili peppers are found in dishes from every region of China. You’ll enjoy samples of spicy chili chicken and eggplant with garlic sauce at a restaurant founded by one of Chinatown’s best-known celebrity chefs.

Sample the Best Noodles in All of Chicago

Our fifth and final stop is for what Chicago Magazine dubbed “the best noodles in all of Chicago.” The centerpiece of the noodle soup is a large cauldron of broth placed atop a heating element at your table. You an add to your soup from a platter of thinly sliced meat or vegetables cooked to your liking. Several spices and sauces are also provided for a variety of delicious flavor combinations.

Many people visit Chinatown to eat or go into the shops. We believe this historic area is worth knowing more about than who makes the best dim sum, although that’s certainly something we enjoy! Our Chinatown walking tour opens your eyes to some of the lesser-known history of Chicago. You cannot fully understand the city unless you know the story of its immigrants, because Chicago is a town dependent on them for its culture.

Plus, when you go on a Chinatown food tour, you go beyond the touristy destinations. We take you to the spots that make the very best food — the restaurants Chinatown insiders know about but the general public does not. These places offer you samples that will amaze and delight your taste buds. Often, the chefs at each stop give our guests items that do not even appear on the menu. Many people go straight from our tour to booking a reservation at their favorite Chinatown spot.

We recommend this tour for anyone who wants to know more about the history of Chinese Americans, Chicago arts and culture, or immigration in The Windy City.

Wentworth Avenue is the main artery of Chicago’s Chinatown district, and home to some of the most popular shopping and dining in the area.

Cantonese cuisine comes from the southeastern region of Guangdong, formerly known as Canton. The Cantonese were some of the first Chinese to emigrate to the United States and their influence is seen in most American Chinese restaurants today.

Chinese Bubble tea (VIP add-on), the other component of a dim sum brunch, is world-famous. China has been growing tea leaves for centuries and has a rich tradition of refined tea flavors.

Xi’an cuisine comes from the northwestern city of Xi’an, one of China’s ancient dynastic capitals. It is rare in the United States, a special delicacy in Chicago’s Chinatown.

Lao Sze Chuan is one of the most popular Chinese restaurants in the United States, opened by celebrity chef Tony Hu, who is lovingly regarded as the unofficial mayor of Chicago’s Chinatown.

Top-rated Noodles in Chicago (by Chicago Magazine) which are popular in dishes from every region of China.

Chinatown Square is a two-story outdoor mall in the center of Chicago’s Chinatown, packed with popular shopping and dining.

Phoenix Restaurant has been a Chinatown institution since the 1990s, serving up fine Cantonese cuisine with an emphasis on seafood and dim sum.

Chiu Quon Bakery is the oldest bakery in Chicago’s Chinatown, specializing in treats from the Macau region of China with a colonial Portuguese influence.

Xi’an Cuisine serves up dishes from the northwestern Xi’an region of China, a rarity in the United States.

A Chicago original since 1998, Lao Sze Chuan has since expanded to locations all over the country, and was named “Best Chinese Restaurant in the U.S.” by both Travel & Leisure and The Daily Mail.

Yummy Yummy Noodles has been named “Best Noodles in all of Chicago” by Chicago Magazine. You’ll soon find out why.

Upgrade to our VIP Beverage Package, which includes samples of plum wine, bubble tea, and a specialty jasmine Chicago craft beer only served at Phoenix Restaurant. 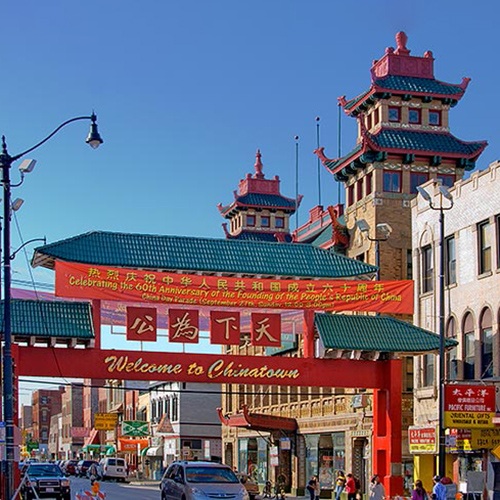 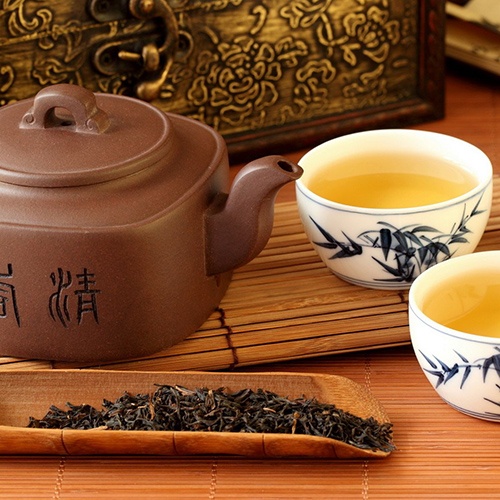 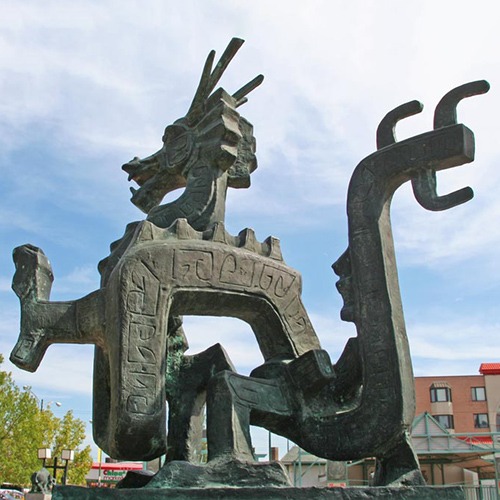 What Our Customers Are Saying“Our guide was very knowledgeable of the history of Chinatown and its roots in Chicago. We had 5 stops in total: Dim Sum, Custard Tarts, Lamb Sandwich with Bubble Tea and really delicious noodles. All the food we sampled was excellent and things we wouldn’t have ordinarily ordered. Go with the VIP upgrade, you will enjoy.”

Whether you live in the city or you’re visiting from out of town, you’ll enjoy one of the best Chicago food tours of Chinatown! If you are here on vacation or business, we recommend you take our tours at the beginning of your stay. This gives you background knowledge you can draw on throughout the rest of your time here. It may also give you ideas for how you want to spend the rest of your time in Chicago.

We pride ourselves on our excellent safety record. Our well-trained guides can assist you with any concerns as you walk your way through the city, enjoying all the culinary spoils of Chinatown while also learning more than you ever thought possible about Chicago’s history. Educating yourself while you eat? It’s the perfect way to celebrate Chicago.

Book your Chicago Chinatown food tour online today or contact us for a private group tour. 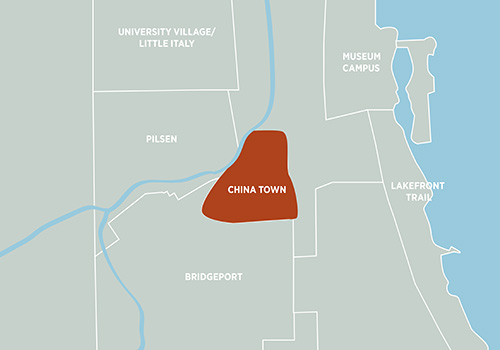